As some of you know I’ve been teaching some internet marketing classes at Montclair Adult School for a couple of semesters.

On Monday I presented a well-attended, lively session titled “10 Rules for Social Media Dominance!”, a guide for small businesses to get the most out of their social media activities. It seemed to go pretty well and the feedback I’ve received is generally positive. 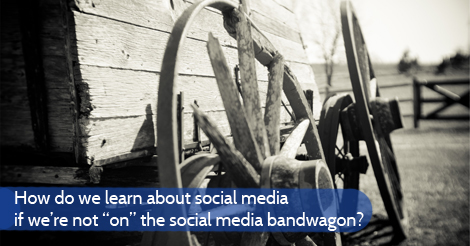 One participant’s comments struck me though. She asked that if one was completely new to social media, as she was, where did one go to learn how to get started? We had joked earlier in the seminar that my initial reason for joining Facebook was to spy on my kids! She made the point that she didn’t have kids so never got on that particular bandwagon. Now she was finding it increasingly difficult to get on it, especially in her professional life where it was just an accepted fact that everyone was already on Facebook, LinkedIn and Twitter.

She’d looked into classes at the Adult School for learning Facebook but they were a) geared towards seniors who wanted to “spy” on their kids and b) scheduled during the work day.

Where did she go just to get the basics?

And you know – I couldn’t think of anywhere!

We’ve gotten so complacent that we’re all “on” social media, we forget that a lot of people aren’t there and really struggle with getting started.

From my perspective I see an opportunity for a future class: Facebook 101 – getting started then moving through from the basics to intermediate to advanced strategies for small businesses. For the unlucky person still grasping to get on the bandwagon I hope it will be a lifeline (sorry for the mixed metaphors!) but I’m worried that it might come too late for them.