When I started using Facebook it was primarily for one function – to spy on my kids! The fact that it had a business component was an extra I only started to appreciate later. The business pages on FB were a great draw for small businesses – they were free, they made it easy to get your message out to your followers and they were easy to use with essentially the same interface as the regular pages.

Then Facebook went and ruined everything! They made it much harder to stay in touch (I wrote a blog post on this in 2102). They started limiting the amount of free stuff that was shown to your followers and *gasp* wanted to make money by asking businesses to run ads instead. While there are still many ways to garner free activity on Facebook (see this recent post from SumoMe) pay-to-play has arrived big time within the Facebook world. (Not unrelated to the fact that they’ve just announced huge profits for Q4 of 2015).

My experience with them is categorically no – they are a good thing and can actually be a very good thing!

My ears were initially attuned to considering Facebook ads after listening to Gary Vaynerchuk talk about them. To paraphrase Gary:

Facebook promoted posts, the ability to directly target ads are the backbone of Internet marketing today. There’s no need to build a follower base at your Facebook page any more. Facebook is hands down the best place to target primary marketing spending.

Fast forward to the blizzard of 2106 (two weekends ago if you don’t remember) and one of my clients wanted to alert their clients to a special blizzard related service they were offering. George J Keller & Sons, LLC are one of Morris County’s elite roofing and remodeling contractors and they wanted to let people know about them now offering roof snow removal services. Instead of a more traditional route of a mass email I persuaded them to run a Facebook boosted post.

I created a blog post on their site detailing the service and posted the post to FB. Once there I boosted the ad based on the demographics the client had selected (age group and geographical area) and their budget – $30/day for 3 days. The ad started on the Friday afternoon and ran through to Monday – the blizzard hit midnight on Friday and continued through Sunday morning.

Pretty phenomenally is what comes to mind! 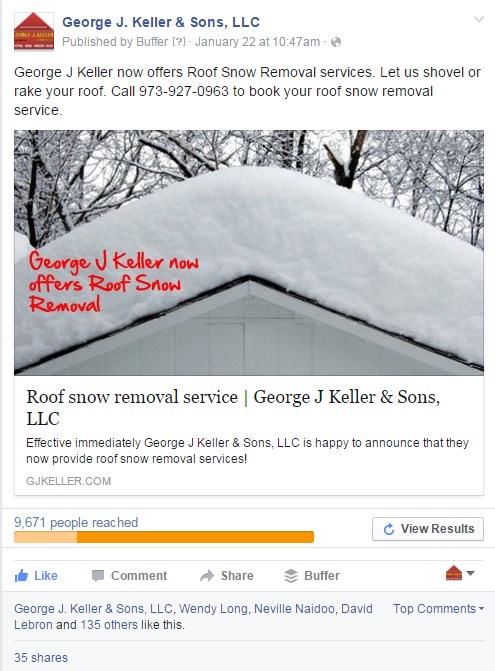 The boosted post reached 9671 people and got 135 likes. Even more importantly it got 35 shares (35 people shared the post with their friends) and a handful of comments including a couple of completely unsolicited testimonials from GJK clients.

When I called the owner on Monday to see if he’d any calls from the ad he told me that he had two crews out right then working based on the activity from the ad and expected more over the next couple of days. A tremendous return for a $90 outlay!